About Us Values Heritage Vision News

How we got our name

Our former flag ship cinema gave us our name. Now owned by Cineworld since August 2016, the Empire Leicester Square has been setting cinema milestones since it first opened in 1884.

About the Empire Leicester Square

The Empire could accommodate three thousand patrons in comfort to enjoy the popular shows of the day, including plays, musical comedies, burlesque and vaudeville – every top variety star played the Empire. The handsome, imposing theatre was quickly established as one of London’s foremost venues, and one that could soon claim to be The Cosmopolitan Club of the World. 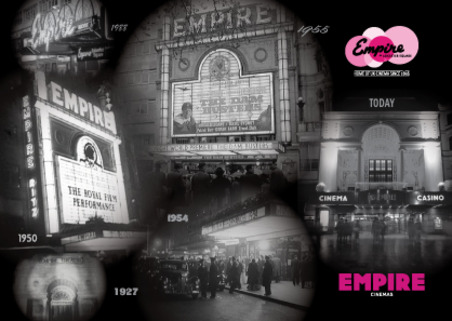 From live plays to the first motion pictures

From the earliest days of the moving image, the Empire played host to the technological advances of cinema. In March 1896, Louis and Auguste Lumiere gave the first theatrical performances of a projected film to a paying UK audience at the Empire, assuring a unique place in cinema history. By the turn of the century the Empire had established itself as one of London’s premier theatres, with live acts and ballet interspersed with performances of short film reels. With the dawning of the golden age of motion pictures in the late 1920s, the Empire was acquired by Metro-Goldwyn-Mayer, who rebuilt the Empire as a movie theatre, with the stated intention of creating a ‘veritable temple to the motion picture’. Bearing the famous lion trademark, the Empire was to be the jewel in MGM’s circuit of movie theatres around the globe, unsurpassed not only in London’s West End but also across Europe and beyond.

After setting admission records through the 30s and 40s – twelve million admissions in its first six years – the Empire became a haven for the public during World War II with its classic atmosphere and glossy escapist movies.

With its growing reputation as London’s leading cinema, the Empire played host to many world and European premieres. Here are just a few of the iconic movies that have opened at the Empire.

Gone with the wind

The longest running picture of the war era was Gone with the Wind. Running in Technicolor, the film premiered at the Empire and notched up an incredible four year run.

The much anticipated follow up to The Lord of the Rings trilogy.

We played host to the new stars and iconic leads from the original trilogy when Leicester Square was transformed with Stormtroopers and many of the movies characters like BB-8.

Following the war years the Empire was re launched in 1949 as the Showplace of the Nation and in 1952 the Empire featured in Chaplin’s film Limelight. In 1959 the Empire closed to allow for the installation of a new projection booth. No less than three Philips DP 70mm machines were fitted (known as the ‘Rolls Royce’ of projectors), and the theatre reopened in December 1959 with the epic Ben Hur, which went on to run for 76 weeks. After thirty-three years and forty-six million admissions (more than the entire population of the UK at the time), the decision was taken by MGM to remodel and refurbish the building in 1961. This overhaul continued the tradition of using only the finest and the best for the Empire, creating a cinema of supreme distinction. Technically, the cinema was upgraded to incorporate the latest in sound and projection equipment, together with full air-conditioning and the largest screen in London for both 35mm and 70mm presentation.

Architect George Coles produced an impressive entrance and lobby in black and white Italian marble, and designed a comfortable 1,330 seat, stadium-style auditorium. Each seat had a superb view of the screen, ample legroom and a reclining design. The auditorium was designed in a series of arches encompassing the walls and ceiling in different textured panels, and the edge of each arch contained banks of coloured lights that could be phased and changed to produce different lighting effects on the walls and ceiling.

Empire Cinemas undertook an ambitious restoration and refurbishment programme with the addition of six new luxury screens as well as Empire’s own large screen format IMPACT® and the West End’s first IMAX® screen that retained some of the elements of the original George Coles arch design.

Back to About Us.